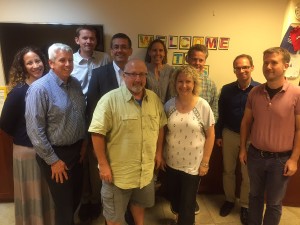 JAIS is a branch campus of AIS, located in Even Yehuda, and is under the auspices of the AIS School Board. Together, JAIS and AIS comprise WBAIS, Walworth Barbour American International School, which is a US non-profit corporation. JAIS has an Advisory Board, comprised of the JAIS Head of School and nine elected representatives: two representatives are from the US consulate, five are community members at-large, and two are faculty representatives. At least two of the members at-large must be American citizens to ensure an American citizen majority of voting members.

The AIS School Board comprises seven representatives, four of whom are required by the by-laws to be affiliated with the US Embassy. The School Board meets each month and has general policy-making authority, with very specific responsibilities for the financial planning for the school. The JAIS Advisory Board Chair is a non-voting ex-officio member who is the representative to the AIS School Board.

The JAIS Advisory Board meets monthly to conduct business in open session. Such meetings are announced beforehand in the school’s newsletter. Parents are welcome to attend. Minutes of all open meetings are available for examination in the Head of School’s office. Confidential matters regarding personnel and contract issues are addressed in private executive session.

The JAIS Head of School has the authority and discretion to make most of the strictly educational decisions with respect to curriculum, staffing, student regulations and activities, and special services. Overall responsibility relating to the hiring and retention of school personnel is the responsibility of the Head of School.

Within this general frame of operation, the JAIS Advisory Board may and does, at any time its members feel appropriate, raise issues regarding any and all aspects of the school’s operations and policies. The school board maintains a consistent policy whereby any parent may bring concerns, suggestions, or ideas to the board at its regular monthly meetings. The procedure is a simple one: parents need only contact the Head of School or Board chair no later than one week prior to a board meeting, indicating the matter to be discussed and arranging a time to appear before the board.