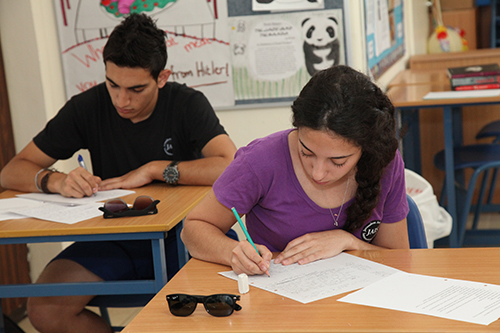 Global History 1: Ancient History:
Traces the development of man in his struggle to overcome his environment. It begins with prehistoric man, the beginning of civilization in the river valley areas of Egypt, Mesopotamia, India, and China. The Greek and Roman periods are covered with special emphasis on their contribution to western civilization. The Middle Ages are studied by contrasting the “dark ages” in Europe with the enormous cultural achievements in the Byzantine and Muslim world.

Global History:
Global History is a year-long intensive social studies course that covers a range of civilizations over roughly fourteen centuries and builds skills of research, communication, and analysis. Throughout, the course will emphasize continuity and change across both time and space and will seek to understand cause and effect within five overarching themes: humans and the environment; cultural development and diffusion; government, empire and conflict; development and interaction of economics; diversity of social structures. In addition to the texts, students incorporate readings from selected primary and secondary sources. Students will conduct independent research on a topic of their choice within the period 1500-1900, culminating in an academic research paper.

United States History:
United States History is a chronological survey of American History from colonial times through the post World War Two period. Throughout the year emphasis is placed on developing and tracing the following themes: the impact and development of American pluralism, the meaning of the “American Dream,” the realization of political and racial equality, the role of government and the dynamics of extremism and moderation in American society. A special component of this course is the contextual nature in regard to the international make-up of the class. A research paper is a required assignment in this course.

Advanced Placement United States History:
A survey of American History from colonial times to the contemporary period, which prepares students for the Advanced Placement Exam in American History. In addition to developing the historical themes described in American History (11), this course introduces students to the historiography of American history. Reading assignments are drawn from college materials and students are expected to work independently on a number of projects. Students enrolled in this class are required to sit for the AP exam and pay for testing fees.

Senior History Requirement:
JAIS believes that graduating seniors should be versed in both the history of the 20th century and of the region where they are currently living. JAIS seniors fulfill the senior history requirement in the following way: Successful course completion of Middle East History (one semester) and successful completion of Twentieth Century History (one semester).

Twentieth Century History:
Twentieth Century History provides an opportunity for students to explore and understand the contemporary world by focusing on several major themes including causes and consequences of conflict, minorities and the nation state and the future of the nation state in the 21stcentury. Following the study of exemplary case studies in each thematic area as a class, students will deepen their understanding by investigating additional cases drawn from both the contemporary western world and developing nations. An emphasis will be placed on independent research, critical analysis, and developing an awareness of contemporary issues.

Middle East History:
Middle East History is a required semester course designed to introduce students to the unique character of the region and its peoples. The themes of conflict, modernization, nationalism, and cultural diversity are examined in both a historical and contemporary context. Middle East history is also a venue for teaching awareness of the dynamics of conflict in human societies, communication skills and conflict management strategies.